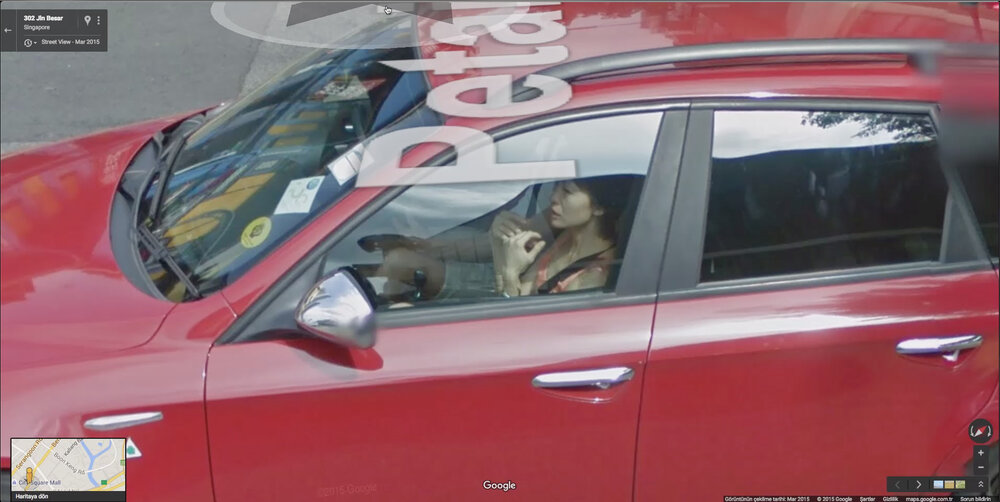 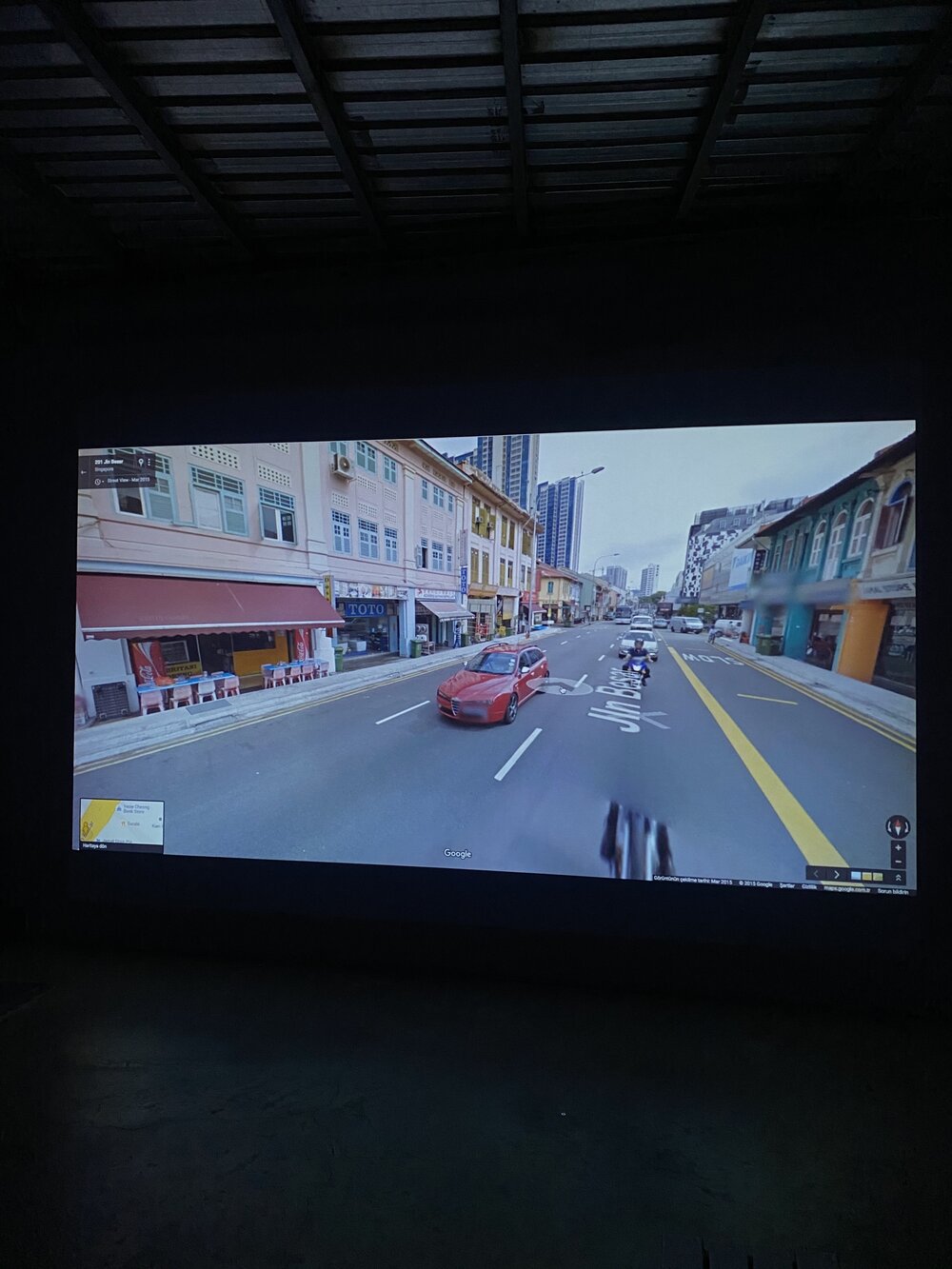 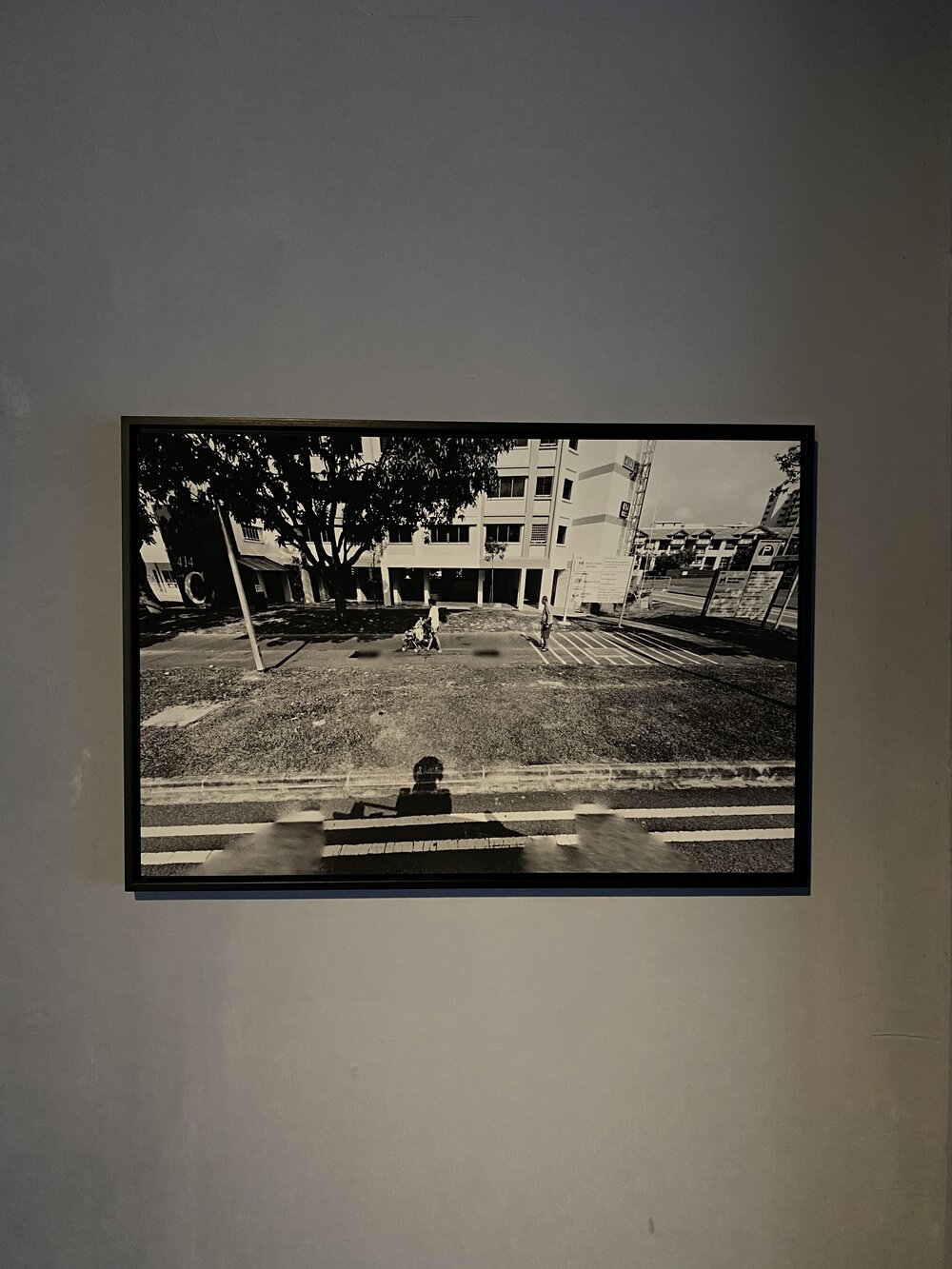 Since 2007, Internet users have been able to lay eyes on a location different and irregardless from the one they occupy thanks to a drag-and-drop function ordained onto Google Maps’ iconic yellow pegman. Each work in Sergen Şehitoğlu’s Google Street View (GSV) (2019) series starts with a random ‘drop’ from which the audience is taken into the viewpoint of the artist navigating the streets of a different city through the Street View function on Google Maps. On view at Bilsart is GSV – Singapore (2019), the Singapore iteration of Şehitoğlu’s on-screen journey to achieve the guiding target of all the works in his series: to capture in one frame a shadow of the nine-eyed Google camera providing Street View with photographs and at least one human being. Şehitoğlu’s expedition in Singapore leads him – and the viewer – to an encounter with a woman weeping in a car, the subject of interest in the ensuing sub-plot which Şehitoğlu trails, until the car disappears from the appearances of the street. A chain of on-screen gestures transcend across and into narrative possibilities that may exist, however dismal, in the depths of everyday technologically-enabled functions.

Also exhibited alongside the video is a photograph which is a screen capture of a moment in Şehitoğlu’s navigation in Singapore. The juxtaposition blurs the distinction between process and final work: The video serves as aide-memoire to the artist’s work process leading up to the photograph, which could just as easily have been a by-product of the video. At the same time, the screen recording not only constitutes the work but is the work. Spanning the length of a feature film, the video shows every minute decision made by the artist at every step and meander in the process of finding the final frame, teasing the possibility of the same work being replicated without the artist’s knowledge. If the screen is the membrane that separates the artist from the viewer, GSV brings us back to question the fundamentals of an artist’s work by positing the same image on both sides.

The material Şehitoğlu uses in his recent productions is cheap visuals obtained via internet and Google tools that are used by many artists.

These works, which both redefine the boundaries of photography and question the limits of the concept of privacy in a world dominated by control systems, can be considered as an exercise to look at current subjects and tools.

Şehitoğlu, who published the photo books “0 dB” in 2013 and “Kill Memories” in 2016, is one of the founding members of GFI, a photography initiative; he still lives and works in Istanbul. Sergen Şehitoğlu is represented by Sanatorium.