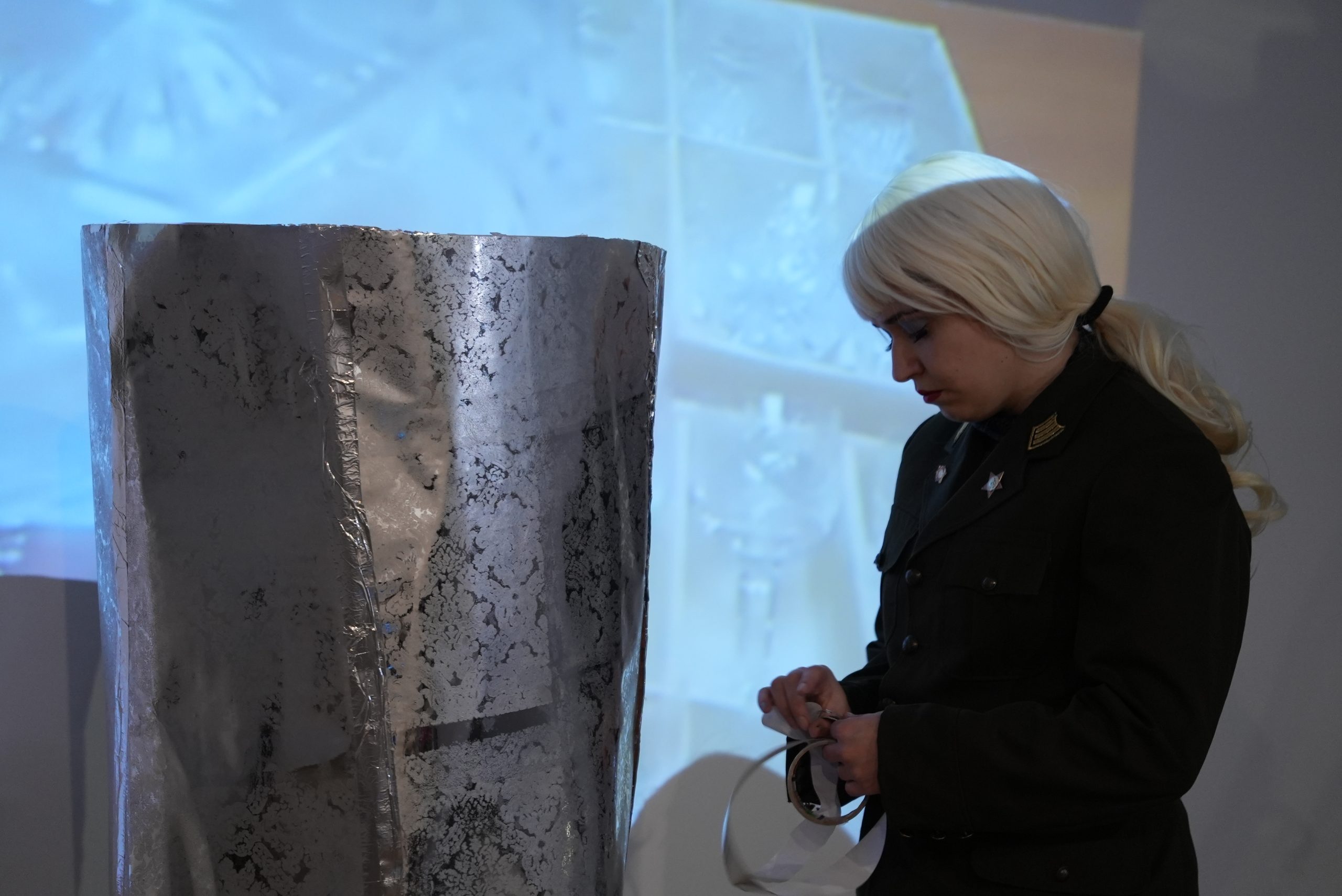 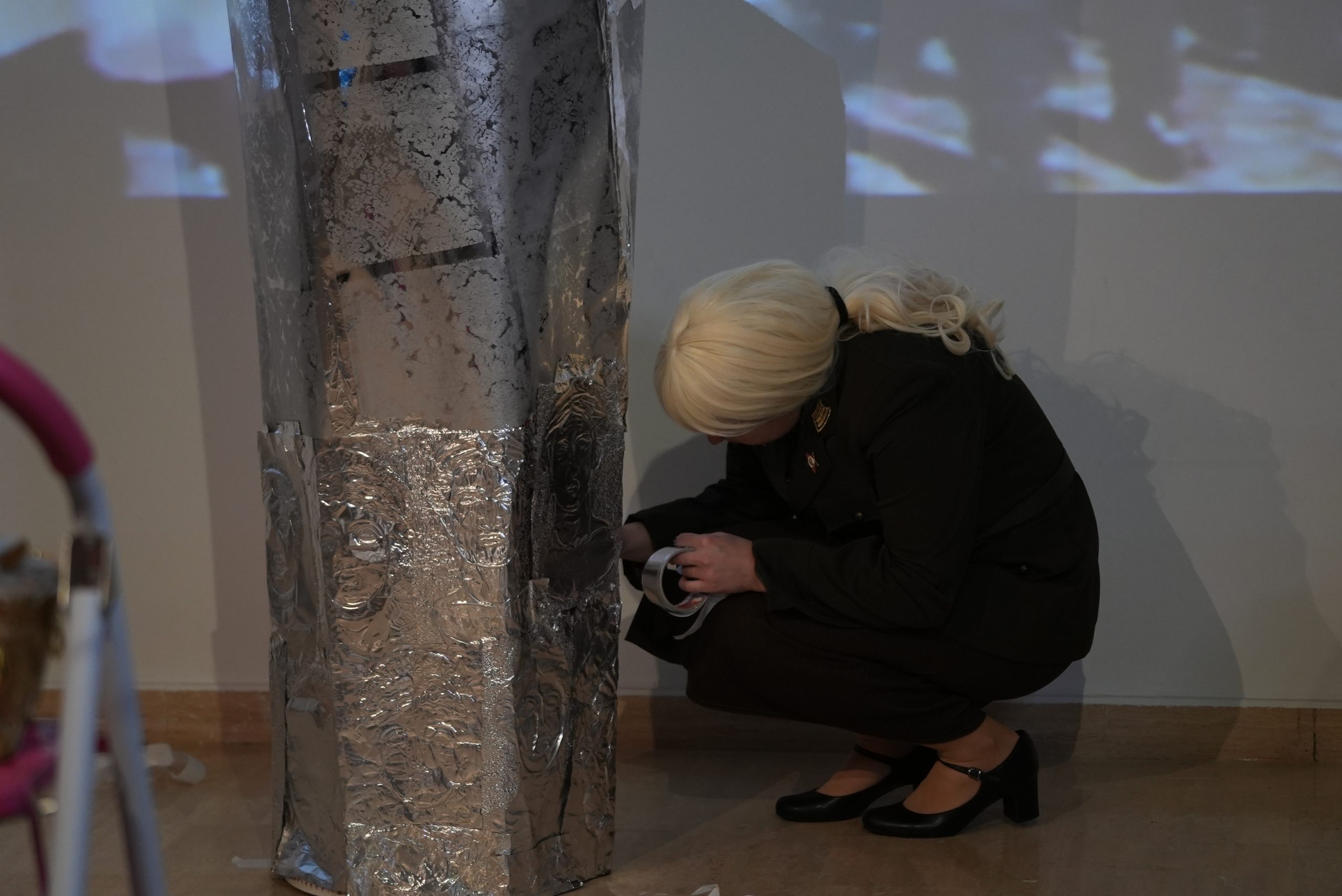 A RECALL OF ONE’S OWN:CRYSTAL VASE

After all, an illusion, no matter how convincing,

remained nothing more than an illusion.1

Sometimes we cannot visualize the past. We cannot hear a sound from a while ago or imagine the details of a face. What is at the tip of our tongue cannot be said; the confusion never clarifies. Sometimes these gaps are formed by conscious forgetfulness. We search for the thing that would fill the gap in our memory – like filling a crater left by a meteor hitting the earth with great force. When things of the past get fragmented into innumerable parts, what we call real becomes only about how we want to combine these fragmented parts.

This is actually an incredibly problematic concept; it is political and psychological, physical and spiritual. It is associated with love and hate, both subjective and objective. It is all at once yet nothing at the same time. Remembering is restoration of reality but can also be construction of fiction. Remembering is daring enough to oppose even an archive that has been recorded, fixed to a point in time yet equally unreliable. Just like the cessation of turbid water, the sediment of experiences covers all as it sinks to the bottom. What lies at the bottom is the comfort zone. Forgetting is the water calming down, while remembering stirs the water. And as a matter of fact, remembering often includes forgetting.

A Recall of One’s Own focuses on the personal and social remembrance practices of two artists born in different parts of the planet.The recent works of Monika Czyżyk and Merve Vural, who were born in the year the destruction of the Berlin Wall began, take the archive and recording practice at the center of the narrative while leaving the audience in unsafe waters – the act of remembering.

One has only to read, to look, to listen, to remember.2

Crystal Vase is part of the series of performances that the artist performed at the Sakıp Sabancı Museum in 2020 as part of Marina Abramović + MAI Flow / Flux, spanning a total of 72 hours. Taking its reference from Rubens’ painting Venus in Front of the Mirror (1614-15), this series is a collection of different video projects. Artist forms nine different performances, White Horse, Crystal Vase, Interface, Alphabet Revolution, Bob Ross’s Squirrel, Holiday Talks, Motif, How It’s Made? and lastly, Your Sign Says / Joseph Beuys, based on Rubens’ representation of Venus. The main common point in the content of the works is replacing the camera with the mirror while looking in the mirror and being watched. The artist is dominated by the gaze of both the camera and the viewer. During this performance, Merve Vural outside the field of representation, becomes a nomad who is constantly preparing herself for the audience, experiencing, imitating and playing other identities, constantly being in “transformation” and in “preparatory stage” rather than creating a certain subject, and in this way, she tranmutes the background of the video production process into a performance. Crystal Vase takes its subject from the Belarusian protests, also known as the Slippers Revolution or the Anti-Cockroach Revolution, that took place in 2020-21. Some scenes from demonstrations that are part of the Belarusian democracy movement and images of workers working in crystal vase factories play as a video in the background as the performance continues. The crystal vase, which was very common in the Soviet period and therefore a large workforce was used in its production, is directly related to the fragile political structure of the region. In the video, the artist wearing a soviet uniform tries to repair it by taping the parts of a fake crystal vase of her own size while the national anthem playing in the background.

Merve Vural completed her undergraduate and graduate studies at Mimar Sinan Fine Arts University, Painting Department. She works multidisciplinary and produces works through pictures, videos and performances. She deals with the image of women in popular culture and reflects on the body, social identities and power roles in her works. Merve describes her own production as a narrative practice and frequently uses methods such as appropriation, pastiche and parody within this practice of constructing a story/narrative. The artist, who mostly uses his own image and body as an interface with which she navigates between different times, figures and identities. Among the exhibitions she has participated in are SENKRON, Nothin’ to Do!, Darağaç, İzmir (2021), Marina Abramović + MAI Flow / Flux, Sakıp Sabancı Museum, İstanbul (2020), Necessity, Darağaç IV, İzmir (2019), I’m Always Home, Gallery MUAF (2018); Where Plato Thought?, Academiae Biennale, Italy (2018); Akbank 37th Today’s Artists Exhibition (2019); Akbank 36th Today’s Artists Exhibition (2018); Mamut Art Project (2018); All For Heidi, Akademililer Art Center (2018); .EXE, Istanbul Bilgi University (2017); Display, Bant mag. pool / building (2017); Byzantion Fest, Bant mag. pool / building (2017); Kuytu, Tophane (2016) and Engravist, Yıldız Technical University (2016). Vural participated in the Daire Sanat Open Workshop Artist Program (2021) and the İKSV Istanbul Biennial Work and Research Program (2018). Lives and works in Istanbul.