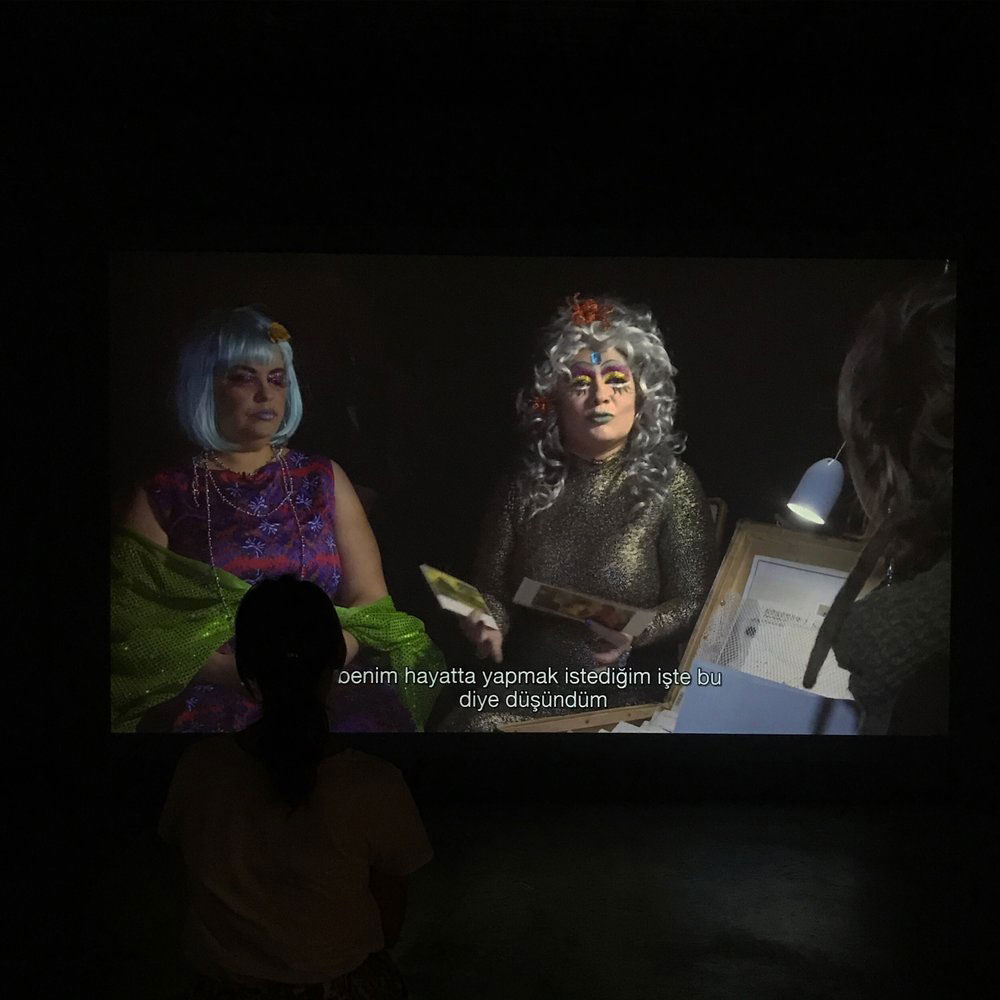 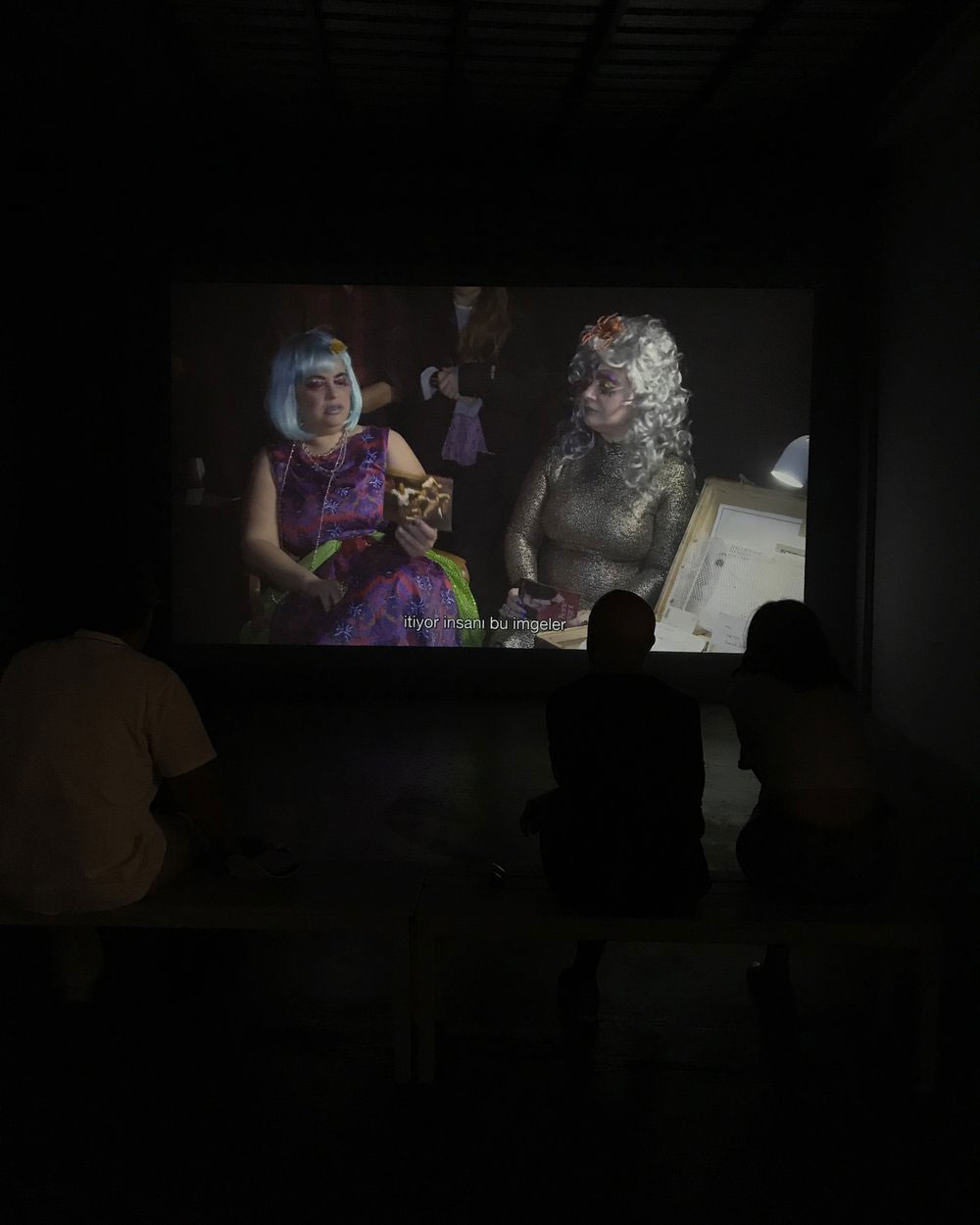 Bilsart hosts the group exhibition “FLOW OUT”, curated by Collective Çukurcuma, between May 29 – June 29.

The program is based on the common practice of thinking, expressing and writing collectively about the present. As co-authors, they continued to write the collective essay through email exchanges—no one is the owner of the piece whereas each of them is a participant. FLOW does not belong to a place—taking place across Beijing, London, Istanbul, Berlin, Amsterdam, San Francisco. It refers to contemporaneity, questioning the problem of authorship in collaboration, and experimenting with the idea of thinking and producing together.

The video work of Beijing-based artist Funa Ye, titled “Flying Dance” is a 30-minute fiction video collage. The first production of the series “self-fiction”, which the artist completed as part of an artist residency program in Berlin in 2017. These stories give reference to the identities created over the Internet and to the early periods of online dating. The viewer follows the female characters through time, inspired by the television programs in China. This work focuses on the effects of gender and identity issues, the emergence of the Internet and especially online dating, while resurrecting a scene from the “Sims” game.

In the second week of the program, Istanbul Queer Art Collective, based in London, will meet the audience with the video documentation of their performance titled “Psychic Bibliophiles”—creating an oral archive of excess, fetishism, and desire. This performance was realized in the opening day of the traveling-exhibition “House of Wisdom”, curated by Collective Çukurcuma at Framer Framed (Amsterdam, 2017). As part of the “FLOW OUT” exhibition, the artists will perform a repetition of this performance in the exhibition space, and will also give a talk on their previous work titled “Just in Bookcase”— a wooden suitcase filled with artists’ personalized library cards, memorabilia and photos—which inspired the making of the performance.

Through performances, screenings and readings, Collective Çukurcuma invites the audience to enagage in a collective thinking process to reflect on these works, texts and performances.

Our library had to die

when we felt we had to leave our country.

Books are heavy, but their spirits are light.

Now each book in our ex-library has a card,

and each card contains a story.

Of how the book came into our hands

Where we read it

What we thought of it

Who has it now

Anectodes that paint the portrait of

what it was like to have lived and read in our country.

Come, step into our parlour and pick a card or two

Let the book spirit mediums tell you its story

Only for your ears and once in a lifetime

The spirit of our dead library will talk to you personally

And stamp you permanently.

Istanbul Queer Art Collective (IQAC) was founded in 2012 with the aim of focusing on queer performance art and a flexible structure open to collaboration. The collective has since been engaged in the ongoing project of remaking Fluxus performances by “queerifying” them. IQAC firmly believes in what Jack Halberstam calls the “queer art of failure” and embraces what Renate Lorenz calls “radical drag”. The collective is currently comprised of the two founding artists Tuna Erdem and Seda Ergul, and is based in London. IQAC has performed and exhibited at various art events around the world among which are House of Wisdom Exhibition in Berlin, Amsterdam, Istanbul and Nottingham, Queer Future Exhibition, If Independant Film Festival and Mamut Art Fair in Istanbul, Athens Sound Acts Festival in Greece, Zürcher Theatre Spektakel and Les Belles de Nuit Festival in Switzerland and Deep Trash, Queer Migrant Takeover and NSA: Queer Salon in London.