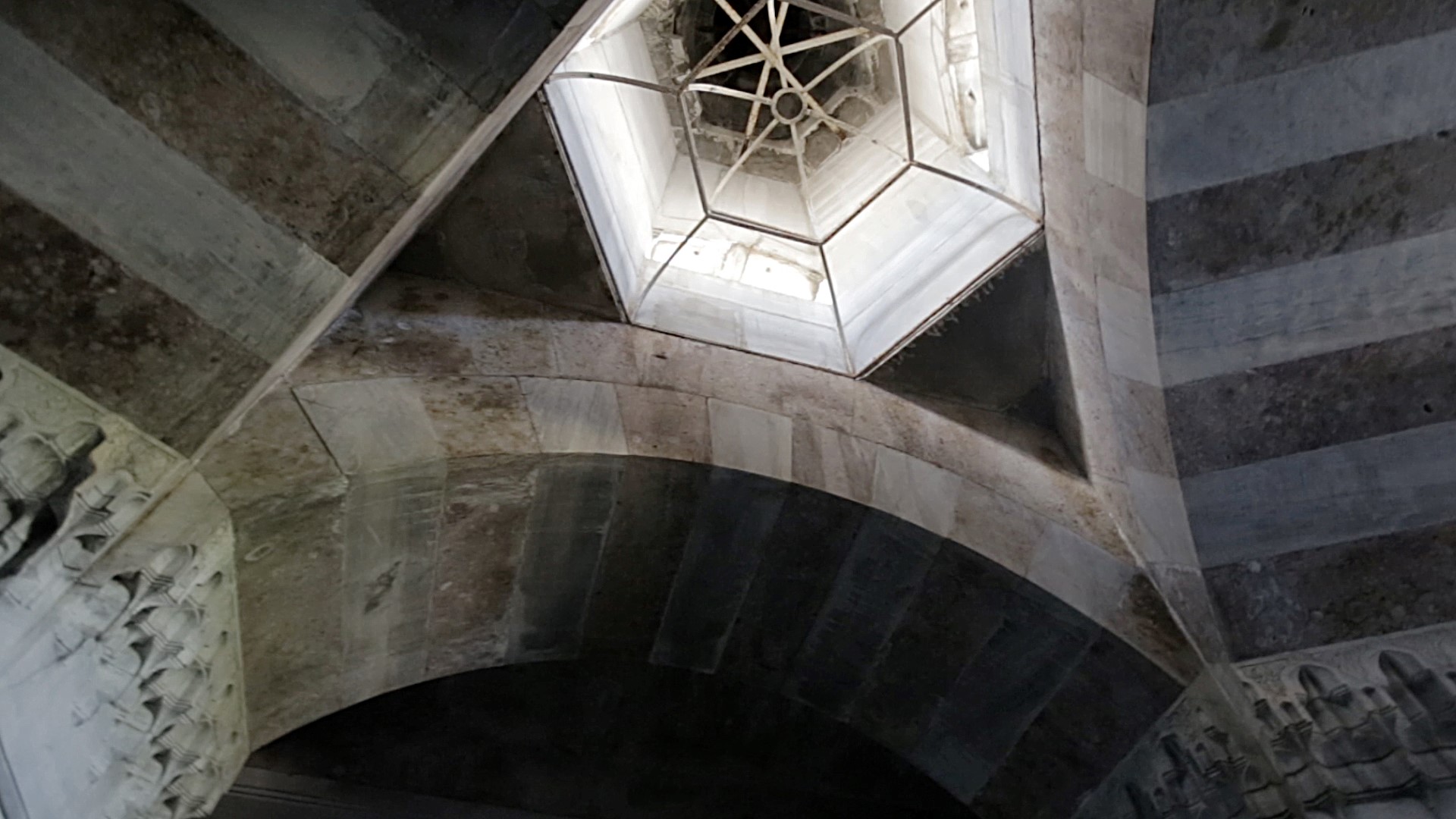 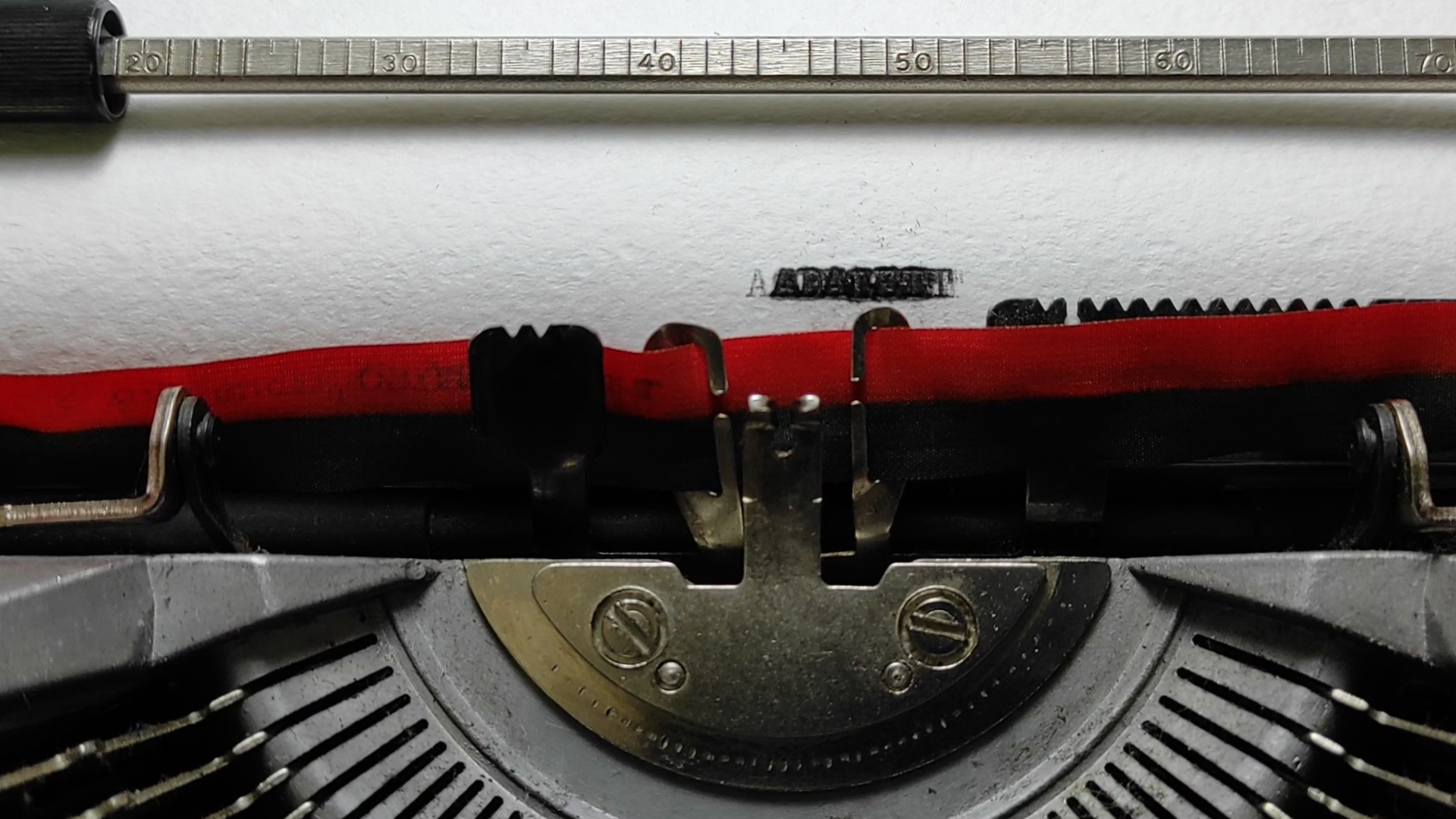 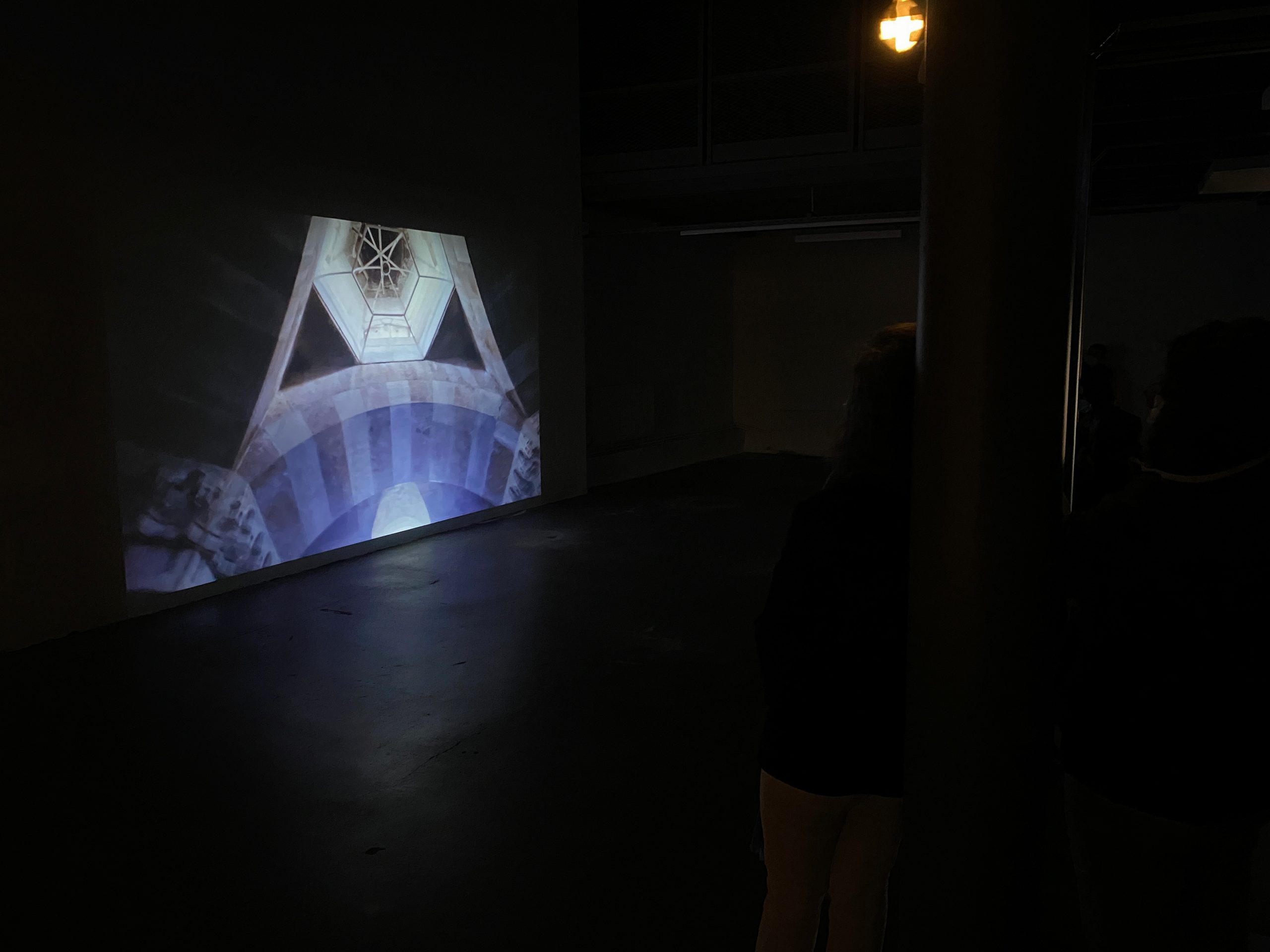 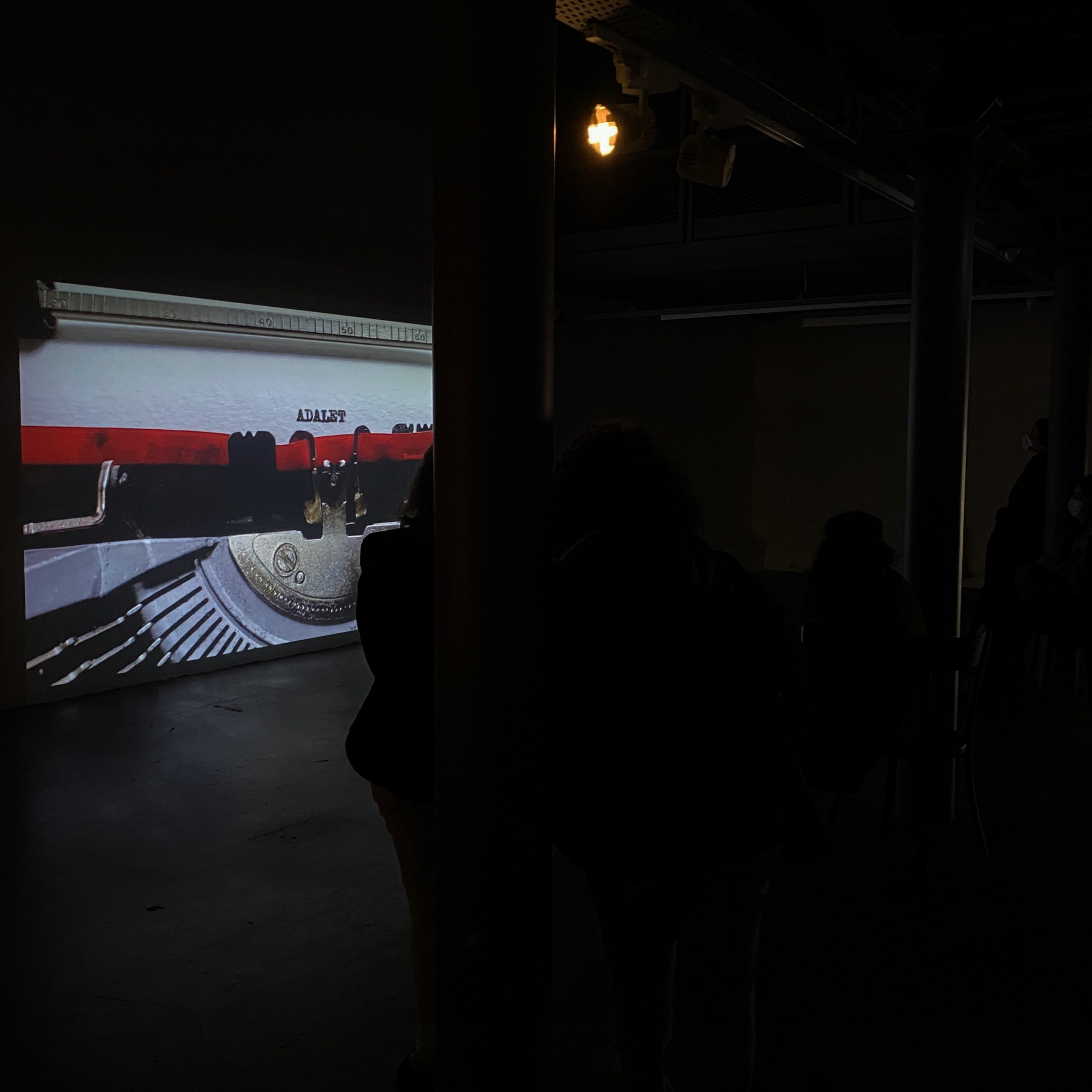 Via the video works of Sibel Horada and Berat Işık, the exhibiton “im/permanent liberty” trails the issues of liberty and justice with a finite/infinite gaze.

When it comes to talk about liberty and justice, the work of art prefers to stay in an unsettled moment and space. Because it seeks, finds and shares the ways of sharing what is sensible and known through various forms and expressions. With the accompaniment of what is inside and outside, history and the present, it is a kind of testimony.

In this exhibition, Sibel Horada and Berat Işık’s videos focus on darkness/vagueness/nothingness with movement, sound and writing. These two works, whose expression styles are completely different from each other, is about the hum of liberty turning into a giant nothingness and the failure of justice to take root in our geography from the times when monuments were erected in its name to the present. It asks questions about the im/permanent future of liberty and justice.

Sibel Horada’s 2017 video work Libérte, Égalite, Fratérnite was shot inside Abide-i Hürriyet (monument of liberty), which was Turkey’s first national monument. In memory of those who died in the name of liberty, equality and fraternity in the 31 March rebellion which started against the administration being in opposition to the Second Constitutional Monarchy and quickly spread throughout Istanbul, the monument was built by architect Muzaffer Bey in 1911. In this monument which has a cannon barrel extending out into the sky, whose interior is designed as a small mosque and which is surrounded by the graves of those who died in the rebellion, Sibel Horada pursues the ghosts of both death in the face of liberty and the cries of constitutionalism passed from people to nation.

Both the monument and the three concepts Liberty, Equality, Fraternity, which Constitutionalists took from the French Revolution (Constitutionalists also added justice to this triad), are the focus of Horada’s work.

The artist takes the viewer on a dizzying journey in the reality of social memory, which also includes the present. Since then, the darkness between those who killed and those who died has tightly covered the urgency of the slogan. In her video, Horada delves into the history of the concept of liberty in these lands. She puts the truth of history and the present into swirls between darkness and light, liberty and captivity in the womb of the monument.

Berat Işık’s video entitled Justice which is the second of his Drain series of 2020 consists of rewriting the word “ADALET” (JUSTICE) until it turns dark. Justice is in front of us with a disappearing prosperity as it is written. In the video, Berat Işık writes constantly. He goes back and writes, goes back to the beginning and writes again… Endless, unpredictable justice turns into the eternal repetition of the quest for equality, freedom and liberty. In the approximately seven-minute video, Işık pursues the typist’s belief in justice over an endless repetition and asks questions: Do our scars turn into nothingness crushed by injustice? Whose justice is the justice that has become unreadable in the video? If the individual comes across justice for a moment, can s/he stop writing and seeking justice?

With the sounds of these six letters, the deep silence of justice between what is inside and what is outside turns into a humming ecstasy. From the text, which became illegible within minutes, remain sounds echoing in the darkness and space. On the one hand, the video suggests the possibility of a video “monument” about the ongoing eclipse about the reality of the present; on the other hand, how many days will the paper being written on last…

The videos of Horada and Işık came together in the association of the past and the present in this exhibition entitled im/permanent liberty. Through the gaze of two artists, the exhibition presents an uneasy reading concerning the lives that have been reduced and destroyed for the sake of.

Horada’s work entitled Libérte, Égalite, Fratérnite is a looping video, filmed in the space inside Turkey’s first national monument, Abide-i Hürriyet (Monument of Liberty). Hürriyet, Müsavat, Uhuvvet, is the Ottoman version of the slogan Libérte, Égalite, Fratérnite, popularized by the French Revolution. This title refers to the centrality of these concepts in the process of nation building.

Abide-i Hürriyet was built in 1911 to celebrate the constitutional regime re-established by the 1908 Revolution and the suppression of the 31 March Incident. The monument looks like a classical victory monument with the form of a cannon pointed up towards the sky, rising on a triangular pedestal. Although it does not reveal itself at first glance, there is a crypt inside the monument, which can be reached through the door on one side of the triangular pedestal. This place, which was designed as a mosque, has been used in military funeral ceremonies held in the cemetery of martyrs on Hürriyet’i Ebediye Tepesi (Eternal Liberty Hill) where the monument is located. This physical space within Turkey’sMonument of Liberty points to the foundational, productive void at the basis of all narratives that govern identity-building processes.

The music composed by Esra Üçcan for the video, Liberty, Equality, Fraternity, parallels the triangle form with its 3/4 time signature. The main melody is played by Cihan Gülbudak (Meczup) on theremin. This instrument, which works by sensing the flow of energy in space, sets the atmosphere of the cyclic choreography of the camera, which corresponds to an ongoing pursuit.

Sibel Horada received her BA in Visual Arts from Brown University in 2003 and completed her master’s degree at the Art and Design Faculty of Yıldız Technical University in 2011. Focusing on personal and collective histories, her work often features a dynamic relationship between form and text that feeds on archival research. All that fades away in time and stabilizes in memory, assumes a dynamic state once it becomes a departure point for Horada’s work. Through her processes of exploration and reproduction, memory attains a visual and physical form. Thus, her works don’t just represent the past; they mingle among the forms of memory in order to project, from the current moment into the future. Horada’s conceptual and symbolic references reveal themselves in the flow of aesthetic experience, while she materializes her open narratives with poetic sensitivity.

“I love you… I love you not like crazy but in a quite sensible way.”*

Adalet (meaning “justice” in Turkish) is the second video in my video series entitled “Drain”. To drain corresponds to attempts to cut and drain a purulent throbbing wound, abscess or lump. So, what to do when emotions throb?

When I was in elementary school, one of my favorite things was to spend time in my uncle’s library and to play with his typewriter. The typewritten paper was immediately gaining seriousness, formality and reality. My detective ID card that I typed and painted a logo over it was so “real” that my friends were amazed.

I called my uncle, brought his typewriter home, sat down at the typewriter and started typing. I was not going to write too long; I only wrote 6 letters. I wrote A, D, A, L, E, T; I went back to the beginning and rewrote it again and again. You know, when something is typed, it becomes “real”; so I wrote it to make it real like my childhood detective ID; if you say something over and over, it will come true, that’s how I wrote; I wrote it again, as I wrote, adalet [justice] turned into a black cloud while it got darkened and became fuller…

Justice has not been served yet for Sabahattin Ali, who was killed on April 2, 1948.

Berat Işık was born in 1976 in Diyarbakır. Işık mostly uses video in his works that he has been actively producing since the late 1990s. The artist, who studied painting, was introduced to conceptual art before his university education, and it constitutes the main theme of his productions.

The video productions of the artist, who adopts a critical and ironic language on migration, culture, social problems and social identities, have a utopian vision and a performative quality. In his videos where black humor is the main ground, Işık questions the impact of popular culture on collective memory. The artist, who considers the sensitivity of the subjects that he deals with great care and attention, takes a critical look at contemporary society and underlines the delicate situation experienced by minorities in Turkey. The forms he produces in various media other than his videos are viewed as the expression of layers of social memory intertwined with the artist’s individual identity and personal memory.

Işık, who had exhibitions, special screenings and gave speeches at institutions such as Pompidou Museum, Tate Modern, ZKM Karlsruhe, NGBK Berlin, École des Beaux-Arts Paris, Arter, Istanbul Modern, Salt and Depo, participated in many exhibitions in Turkey and abroad. The artist, whose documentaries and videos have been shown at various film festivals, still lives and works in Diyarbakır.